Through One Woman’s Eyes 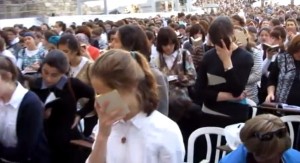 Although I go to daven at the Kosel every Rosh Chodesh, I no longer choose to go for Shacharis because I find the presence of the Women at the Wall, with all its ramifications, both disturbing and uncomfortable.

On Thursday we read in Hamodia about the call for women and girls to come and
daven at the Kosel to contrast the absurdity of the actions of the few with the normal activity of thousands of bnos Yisrael doing at the Kosel what they do every day of
every week of every month — davening and saying Tehillim.

A secondary consideration was that if the Kosel plaza were full of thousands of
ehrliche women, then there  would be no physical space for the deviant activities to
take place.

In fact, the whole Kosel Plaza on the women’s section was full all the way up the
ramp ,past the sinks, with women and girls davening, just like at Birkas Kohanim.
There were literally tens of thousands of women. There were people all the way up the steps from the approaches to the Rova and on all the rooftops. There was a very
heavy police presence, including border police — a lot of them women.
All of a sudden we were all jostled and the police started bringing in police barriers. It
seems the police did not believe in first come first served and created a spot for
them, albeit on the upper level and not at the Kosel itself. So in reality the mass
gathering was a success as it passively prevented them from being where they usually are near the Kosel.

One would have hoped that the media would have been overwhelmed with the pleasant, quiet, derech eretzdiker demeanor of the tens of thousands of women of all ages and nationalities, but instead they focused on the activities of approximately 30 women carrying out their feminist agenda with absolutely no regard for Kedushas
Hamakom.

The group tried to remain oblivious to the fact that they were heavily outnumbered,
out maneuvered and most of all made to look negligible in the presence of tens of thousands of normal Jewish girls and women. But one was able to sense that they knew that they were up against a much stronger force then they can deal with — that of true mesorah being quietly expressed by the thousands of bnos Yisrael
present.

Meanwhile, the whole Kosel area continued to swell with men and women coming to daven. Most of the girls were totally oblivious to the small area that was attracting
all the attention. I stood right behind the barrier, uncomfortable with my close proximity to the event yet I had a view of the whole Kosel area.

Naturally, the women’s side was fuller than the men’s. It was literally overflowing and
totally inaccessible. On the men’s side was the usual scene of bar mitzvas, kriyas
HaTorah, Birkas Kohanim – business as usual for Rosh Chodesh.
It was a kiddush Hashem to see the decorum of the thousands of girls, many oblivious to what was going on as they davened with kavanah, and in the Kosel area itself the atmosphere was like on any other day.

Nevertheless the group did manage to carry on with their activities. As they picked up their pamphlets and raised their voices there was whistling and other noises to
effectively drown them out, using their own logic of freedom of expression. It was not
particularly confrontational but obviously the media tried to play it up, forgetting that
the people around them have at least as many rights as the group does, if not in fact much, much more.

At 8:00 a seminary principal holding a megaphone came towards the ladies’ side of the barrier on the elevated level and thanked all the girls for answering the call of the
Gedolim to come and daven at the Kosel this morning. He said that he was proud of their display of kiddush Hashem. Now he told them to start going back to the buses which were waiting to take them back to seminary and slowly the girls started to leave.

2 thoughts on “Through One Woman’s Eyes”