Groups Slam “Incredible Hypocrisy” of Women of the Wall

In a joint statement today, the Women For the Wall (W4W), an organization of women working to preserve traditional prayer at Jerusalem’s Western Wall, and the Coalition for Jewish Values (CJV), an Orthodox Rabbinic group, slammed the petition of the Women of the Wall (WOW) to the Israel Supreme Court as “incredible hypocrisy.” As reported in the media on Wednesday, March 15, WOW submitted a petition to the Supreme Court “demanding the right to pray undisturbed at the Western Wall in Jerusalem.”

“The last thing that WOW desires is for quiet, undisturbed prayer without media attention,” said Leah Aharoni, cofounder of W4W. “On the contrary, their agenda is the disturbance of the prayer of others, and it is high time that the rights of the true victims be respected.”

The W4W website meticulously documents statements from WOW leaders reflecting their desire to disturb prayer and spark confrontation — what WOW’s own founders described as an agenda to “shock” and “change” traditional women. Leaders and members declare that they seek attention from the media and public. One of WOW’s own members describes how her colleagues “sing at the top of their lungs in an operatic voice.” Last Elul, WOW members blew over 10 shofaros in unison, disturbing prayers held at synagogues elsewhere in Jerusalem’s Old City. 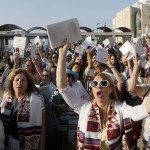 “WOW first creates a confrontation, and then portrays itself as the victim. When we were able to bring 15,000 women to the Wall to stand in silent prayer and to ask that this opportunity be preserved, WOW responded by trying to tar our efforts due to the misbehavior of twenty-five or so uninvited, rowdy (male) students,” explained Jenni Menashe, also a W4W cofounder. “WOW consistently refuses to dialogue or consider the rights of the thousands of women who come to pray at the Western Wall in traditional fashion each day.”

“This level of hypocrisy would be mind-boggling,” added Rabbi Yaakov Menken, Director of the CJV, “were it not sadly typical. [WOW Director] Anat Hoffman’s career is about opposing religious growth, not advocating for women, yet she and the American Reform movement deliberately misportray her intent and credentials.”

“What sort of advocacy for women’s rights involves trampling upon the rights of 10,000 women for the sake of fifty? If WOW desired undisturbed prayer, they would pray at the plaza created for ‘alternative services,’ a platform deemed acceptable by the American liberal movements,” added Menashe. “It is clear that they have an alternate agenda, and are simply playing the victim for crass political purposes.”

“WOW is imposing their own form of worship on Judaism’s holiest site, in violation of the sanctity of the place and existing practice, deliberately fomenting discord and acrimony,” concluded Rabbi Steven Pruzansky, a Senior Rabbinic Fellow of the CJV. “Such brazen actions would be unthinkable at the holiest sites of other religions. WOW should demonstrate the same respect for Jewish traditional practices that decent people everywhere show for those of all religions.”